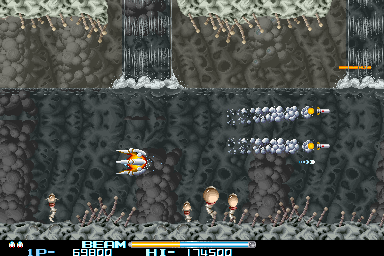 R-Type II (アール・タイプ II Āru Taipu tsu) is a horizontal scrolling shooter arcade game developed and published by Irem in 1989. It is the second game in the R-Type series. The game is the sequel to R-Type, which was first released as an arcade game in 1987 and profoundly influenced later shooting games with its charge shots, unique weaponry, and grotesque enemies. Hudson Soft ported the later 4 levels of the original R-Type to the PC Engine with the title R-Type II, but the Hudson release is unrelated to the game described in this article. The player controls a ship called the R-9C (or R-9 Custom), which is an improved version of its predecessor game's ship; the R-9. The ship's design was changed slightly, and the wave cannon was given homing capabilities. Two new types of weapons (the Search Laser and Shotgun Laser) were added, bringing the total number of weapon types up to five. A new anti-ground unit bomb was also added to the missile inventory. Though the number of levels was decreased from the prequel, the number of enemies, their durability, and the number of bullets they shoot were greatly increased. Enemy movements and terrain were also made trickier, bringing the game's difficulty up considerably. The same revival system is used as in the prequel, where the player is brought back to a checkpoint whenever their ship is destroyed. The controls are mostly unchanged from R-Type, where the 8-way joystick controls the ship's movement, and the shot button fires the ship's main beam. The other button is used to equip or unequip Force; the series' most unusual innovation. Pressing down the shot button causes the blue beam gauge to fill up, and releasing the button causes a wave beam to travel a certain distance depending on the length of time the button was pressed down. If the button is pressed down until the blue gauge is fully charged, a red gauge appears and fills up quickly. Filling up the red gauge causes it to flash blue and red, releasing the shot button at this point shoots an even more powerful beam. Unlike the normal beam that only travels in a straight line, the newly added Shotgun Laser beam explodes in multiple directions after traveling a short distance. This shot causes heavy damage if the player can target a single enemy with it. However, holding the button down after the gauge is flashing causes the beam to return to the normal transverse beam (the gauge alternates between flashing and returning to the normal state while the button is held down), so the player must release the button at the right timing in order to successfully target enemies. The other newly added beam, the Search Laser, is semi-homing, and can bend at angles up to 45°.

R-Type II is a side-scrolling 2D shooter with spacecraft and the sequel to the original R-Type. The player controls the ship R-9C, the successor to R-9 with some changes to the weapons. The wave cannon is now able to track enemies and there are two new types of weapons: search laser and shotgun laser. For the land units a new anti-ground bomb can be used. The arcade game and most versions derived from it such as the Amiga one contain six levels, each with their own boss. The Game Boy version has five levels and does not incorporate the new weapons.